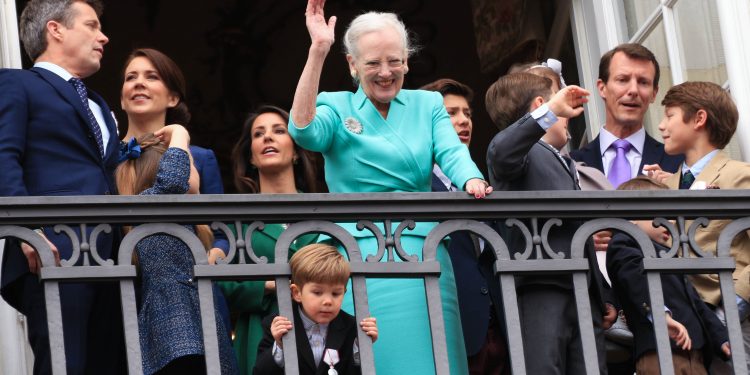 Queen Margrethe on the balcony of Amalienborg with her sons, daughters-in-law and eight grandchildren in 2015

If you were to hold a new year’s party, one would imagine for it to begin around 7-8 pm, giving people enough time to chit chat, have dinner and count down the final hours of the remaining year before ringing in the new. Not in Denmark. If you are to congregate, best get to the location before 6 pm, in time for the Queen’s New Year’s speech, officially called the New Year Address.

As a newcomer to the country and a non-dane, the need to watch the Queen’s speech, let alone feel the urge to view it with friends and family as part of a gathering, was lost on me. Having people come over in the afternoon (usually people start arriving around 4 pm!) for an event that doesn’t take place until the clock strikes 12, seemed weird, time wasting and tiring. Talk about elongating an evening!

And then the clock strikes 6 and the party comes to a standstill. Music dies down, people stop their chit chat and all eyes focus on the flatscreen on the wall and the image of The Queen of Denmark, Her Majesty Margrethe II. You, the non-dane, a newbie, look around confused, wondering what just happened.

Did the party really just die down for this?! So people can listen to what the Queen has to say? Really?!

The newbie mind screams “so what? Can’t people just watch a repeat telecast later on?  Is it so important that people actually stop partying to sit down and listen?” The answer is a resounding, YES!

Watched by approx. 2 million viewers in Denmark, every year, via DR1 and TV2, the Queen’s New Year’s speech is an integral part of the Danish New Year’s eve. Majority of Danes prefer watching the speech with friends and family so they can later on, further discuss and dissect it.

Broadcast at 6 pm every 31 December  in Danish – with an English translated text available on the royal home page (www.kongehuset.dk) soon after the speech is done.  It is of such importance, that most socializing spots in the country are prepared beforehand to showcase the event on large projector screens. You simply can’t miss it.

It’s really her own opinion – almost

So what makes the speech so popular or important for the average citizen to watch? It boils down to several things, the first being the absolute respect Queen Margrethe II has amongst her people as does the rest of the Danish royal family.

A voice of reason in a political and rhetorical debate climate that for most part is becoming more and more harsh. People look up to her, to understand what the state of the nation is, what direction the country is headed towards or should be moving in. Her views and opinions matter to the average Dane.

A monarch already, she has no ulterior political motive. She is not fighting for office or for re-election. What she has to say is her very non-political opinion on issues that face the country and its citizens.

The only political aspect in the Queen’s speech is the draft list of topics sent to her by the The State and even that is at her discretion. She can pick and choose what topics she wants to discuss and decide what to leave out.

The speech is then written in collaboration between the Queen and her cabinet secretary, which they start formulating in November of every year.

The funny thing is, if you ask a random Dane why they make a big deal of watching the speech, live? The answer will most often be, “because that is how it has always been done”.

No one knows how or why it became such an integral part of the Danish New Year’s eve, but now that it has, or has been for such a long time, people can’t do without. Either way, always good to know what the head of state is thinking, right?

An English version of the speech is usually uploaded to the royal site kongehuset.dk a few hours after the speech has been aired.

Read about the many tourist friendly New Year activities of the royal family from 2 to 4 January in our article here: