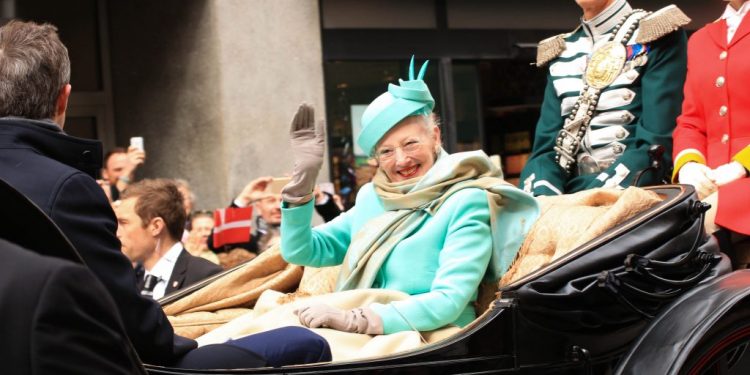 This picture is from a past event when the Queen celebrated her birthday with a coach ride through the streets of Copenhagen. Picture: Hisham Ammar

Danish Queen celebrates her Golden Jubilee with a horse-drawn carriage ride accompanied by her mounted  guards through Copenhagen.

It should have been celebrated on 14 January this year, but due to COVID-19 all the offical celebrations were postponed to 10 and 11 September, and at this time the public celebrations were cancelled due to the death of Queen Elizabeth, a close friend of the Danish Queen.

On Saturday 12th November royalists can finally cheer her several times both at Amalienborg as well as at the Copenhagen City Hall.

The mounted horse guards, Gardehussarregimentets Hesteeksadron, will escort the Queen when she rides in either her open horse drawn carriage ( weather permitting) or in her Gold Coach through the streets of Copenhagen.

All 50 riders make out a spectacular sight.

11:45: Changing of the guards at the royal palace

12:35 The Queen will leave her palace to ride through the streets of Copenhagen in an open horse drawn carriage (weather permitting) to the Copenhagen City Hall. She will be escorted by 50 riders from the Guard Hussar Regiment’s Mounted Squadron: Gardehussarregimentets Hesteeskadron.

13:00: The Queen arrives at the entrance of the Copenhagen  City Hall and she will appear on the balcony to be cheered by the city’s residents.

The route takes her from Amalienborg via Marmorkirken, along Store Kongensgade  to Kongens Nytorv from where the procession follows the pedestrian streets until Rådhuspladsen.

The streets of Copenhagen and Amalienborg Palace will be full of Danish residents ( and probably some tourits), so be early to get a good place from which to view the events.

At the City Hall, the Mayor of Copenhagen will host a lunch for the Queen, members of the royal family and other guests.

You can find a link to the route here.

A bit of Royal History:

On 14 January, it was be 50 years since Queen Margrethe II became Queen of Denmark.

Margrethe was born on 16 April 1940, a week after the Nazi invasion of Denmark, at the Amalienborg Palace in Copenhagen.

She was the first child of Crown Prince Frederik(who became King Frederik the 9th) and Crown Princess Ingrid (Queen Ingrid).

At the time of her birth, only males could ascend to the Danish throne. However, in the absence of a male heir, a new Act of Succession was passed in March 1953 which meant females could become Queen as long as they did not have a brother.

Consequently, at the age of 13, the young Princess became heiress presumptive to the throne.

On her accession to the Throne, Queen Margrethe II became the first Danish Sovereign under the new Act of Succession.

The Act was revised again in 2009 to allow full equality, which means that the regent’s oldest child – regardless of gender – now inherits the Throne.

She is the first female monarch of Denmark since Margrethe I who ruled the Scandinavian countries from 1375 until 1412.

The Queen is known for her creativity and style. Many of her paintings have been exhibited both in Denmark and abroad.

She was the stage designer of “The Snow Queen” which premiered in 2019 in Tivoli and is often seen wearing clothes that she designed herself.

She illustrates books (including the Danish edition of Tolkiens’ Lord of the Rings) and designs postage stamps under the pseudonym Ingahild Grathmer.

Covid-19 restrictions resulted in a number of the events that had been scheduled to mark the 50th anniversary of Her Majesty The Queen’s Accession to the Throne in mid-January 2022 being postponed.

These include, among other things, a celebration at the Copenhagen City Hall, a command performance at the Royal Danish Theatre’s Old Stage, a celebratory church service in Copenhagen Cathedral, and a gala banquet at Christiansborg Palace, which have now been scheduled for 10 and 11 September 2022.

Above pictures:(left to right): Queen’s 81 birthday during corona- the royal guard plays for her at Fredensborg, 3 sisters and 2 Queens Margrethe, Benedicte and Anne-Marie (ex Queen of Greece), Margrethe as a young child and her mother Queen Ingrid, a series of pictures from former public celebrations of the Queen without an epidemic. Pictures: Den Kongelige Fotografisamling, Kongernes Samling, Keld Navntofte, Kongehuset, Hisham Ammar, Per Morten Abrahamsen