English language theatre with a new venue in Aarhus 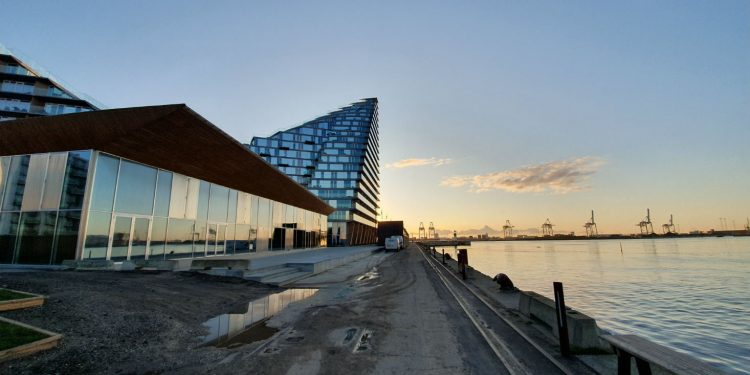 The theatre group, Teatret Gruppe 38, is now located in new buildings in Aarhus Ø.

The latest show at Teatret Gruppe 38 take place in brand new locations in Aarhus. It is guest visit performance by Actor/puppeteer Michael Vogel and musician Charlotte Wilde from Germany.

EXIT – A Hamlet Fantasy is a deeply satisfying, pocket-size performance of the Shakespeare classic Hamlet re-telling the story of the prince who revenges his father’s death with music, puppets and, of course, the ultimate destruction.

The show starts half in the dark, showing a stage that might just as well be a scaffold. Scary objects such as bones and half-rotten body parts are lying about, as if thrown away.

Puppeteer Michael Vogel wanders around, picking up things that try to talk to him, with him or through him. A skull lacking its lower mandible is talking gibberish – no surprise when part of your face is missing. But gradually, objects become puppets and puppets come to life: the melancholic mother who sings, the proud king, and the famous Hamlet-actor in the frame story (performed in a frame) who is endearingly vain.

This is certainly not a performance for children, yet it clearly appeals to the childish soul of the audience as the audience laughs, giggles and grunts appreciatively when actor/puppeteer Michael Vogel shouts out loud, or throws around planks – or talks, dances and sings with his puppets. Quite macabre and yet funny.

Snippets of the Hamlet story are connected by Charlotte Wilde’s live guitar music or from recordings, and sometimes by Michael Vogel himself, sounding surprisingly much like Tom Waits.

The performance of the two renowned German artists is a classic and has been performed since the late 1990s, traveling Europe and winning prizes. Keep track of them and see if you can catch them – maybe at their home base in Leipzig?

The theatre started in 1972 on Mejlegade, in the old city centre.

After having moved a couple of times since then,  Teatret Gruppe 38 has now moved into completely new quarters in the up-and-coming neighbourhood of Aarhus Ø.

Designed by Bjarke Ingels, the theatre is part of the landmark apartment building called AARhus (also known as Festservietten/The Party Napkin) at the harbour entrance.

The theatre’s café is both simple and Danish-hyggelig with retro chairs and a pinewood interior. A bar on wheels caters for coffee, tea, soft drinks, beer and wine.

Through the glass facade you can see the harbour and the docks of the ferry to Sjællands Odde.

The area still breathes that pioneer-kind-of atmosphere, which new buildings in new but not entirely finally developed areas have. Next to the theatre, a restaurant will open later this spring.

After the performance, and while the stage scenes are taken down, the theatre’s PR and marketing manager, Ditte Dalsgaard, explains in a short interview the ambitions and goals of the theatre in Aarhus.

Originally a children’s theatre group, where is Teatret Gruppe 38 heading?

” We’re still seen as a children’s theatre, and that has to do with our 1970s roots. During that time there was a ’wave’ which wanted to include children in the art scene; meeting them at their own level, taking children seriously.

At the same time, the ambition was to be innovative, challenging and contemporary, contrary to being not old-fashioned and based in the classics, instead, theatre was to be rooted in the everyday life of children.”

Since the 1970s, we have transformed to a theatre that reaches out to a wider audience. We are in the lucky position that we can play the same performance in the daytime for children, and at night for a mainly grown-up audience.

And we see the third generation of children coming to Teatret Gruppe 38, together with their parents and grandparents who know the theatre from their own childhood. There is something magical about that!”

When did you start to make performances in English?

” Since we do a lot of touring around the world, we have our performances in English anyway, and we can see that we are catering for a growing demand for English-spoken theatre here in Aarhus.

Five years ago, Teatret Gruppe 38 started bringing English theatre performances to Aarhus. And that makes sense, because Aarhus aims at being a more international city. From that follows that the cultural scene should be internationally oriented – of which, in the end, the Danes benefit as well.”

Doc Lounge is a Scandinavian initiative with roots in Sweden aiming at showing documentaries from many different countries with English subtitles. At present, Doc Lounge has ’satellite lounges’ in several cities in Norway, Finland and Denmark.

” At Teatret Gruppe 38, we aim to be the culture house of Aarhus Ø, and in Doc Lounge we have found a partner who matches our DNA: an international identity, challenging, digging deeper, past the surface matter. And since most new documentaries have English subtitles, this dovetails nicely with our growing international approach.”

The next Doc Lounge’s event to take place in the venue of Teatret Gruppe 38 will be on 5 March with the screening of the documentary, “Before father gets back” by Mari Gulbiani.

Later this spring there will be more English language performances such as the play Sonatina, by Teatret Gruppe 38 (see former review in YDL here: https://www.yourdanishlife.dk/dangerous-kitchenware-and-a-hen-makes-hilarious-theatre-in-aarhus/ and a guest performance called Nettles, by Trickster-p, a Swiss theatre company.

Not to forget is the event Danish+ (Danish Plus), a bi-annual event with theatre representatives from around the world who meet in Aarhus to see what the Danish theatre scene has to offer.

From 4 to 6 May 2020, you can enjoy at least twelve performances, all in English and all with free access, just sign up well ahead to get access.