Never been to Hawaii? Check out the waves of Cold Hawaii instead

Tucked away on Thy in Northern Jutland lies the vibrant little beach town Klitmøller, surprisingly it is a true surfer’s paradise. Surfers from all over the world gather here on Thy to ride the waves. However, it is also a place for non-surfers to come to enjoy the sea and beautiful surroundings.

The excellent surfing conditions have made Klitmøller what it is today: a surfing hot spot. Hence the name “Cold Hawaii”, which covers some thirty different locations spread over the area of Thy.

Cold Hawaii caters to the wishes of all types of surfers, stand-up paddlers (SUP) and windsurfers.

Since 2010, the Professional Windsurfers Association World Cup in wave performance has been held right here every year in September, which says something about the quality of the conditions.

No matter which direction the wind comes from or how hard it blows – hardly a day goes by when you can’t go out and surf.

From the towering waves at Klitmøller, to the shallow waters and mild, steady winds over Vandet Sø for beginners, Cold Hawaii has a suitable surfing spot for everyone.

Even those who are not into windsurfing can enjoy Thy as well.

Turn your gaze away from the sea and toward land: there are stretches of heath, dunes and beach as far as the eye can see.

Small lakes, plantager (the typical Danish planted forests), and small brooks winding their way to the sea, make Thy an excellent spot for hiking, cycling and even bird-watching.

In fact, Thy has been a national park since 2008. In this way, Jutlanders have found a way to make the richness of nature work for them economically.


Originally a thriving fishing village, Klitmøller’s economy nose-dived in the sixties. Professional fishermen moved up to nearby Hanstholm, which had a harbour that could accommodate larger ships – a necessity in the increasingly competitive fishing industry.

But in 1981, a German surfer helped change Klitmøller’s economic future by happenstance.

Trapped in Hanstholm because his ferry ride to Norway was delayed due to hard winds, Christian Dach found himself biding his time on the island.

Looking for a place to get his board wet, Christian discovered Klitmøller and was delighted.

When a few years later an enthusiastic article about Klitmøller in a leading German surfing magazine was published, a steady stream of surfers poured into Klitmøller the year after.

The surfers and tourists have been coming ever since.

Initially, the new guests were seen by some locals as a nuisance: surfers parked their vans wherever they liked and camped out in the rough.

The anarchic, free-riding lifestyle of the wandering surfers clashed with that of the local descendants of fishermen. But when other locals realised the visitors could be the source of economic growth for this rather neglected corner of Denmark, things changed.

In order to attract a broader audience, Thy municipality invested in more and better facilities for all types of tourists with an interest in water sports and nature.

So Thy embraced its newly-discovered status as a surfer’s paradise, with Klitmøller as the “capital” of Cold Hawaii.

Surfer’s paradise a huge success
One of the driving forces behind Klitmøller’s success is Rasmus Johnsen. With a background in philosophy and surfing, he set about building bridges between surfers and fishermen “to integrate these two groups”, as he says.

Klitmøller is still growing economically. The local supermarket has had a steady growth of ten percent every year in the last five years, and other businesses are showing growth, too.

Not only do the restaurants, hotels and surf schools thrive in Klitmøller, but so do also small businesses like the clothes brands Elsk and Klitmøller Collective and flexible office spaces like Starfish and CoWork Klitmøller. Cold Hawaii even has its own beer brand. And the number of inhabitants of Klitmøller has been growing, too.

New people have come to stay here, and we’re even experiencing a little baby boom. Our primary school is growing as well. It is, by the way, the only school in Denmark which has surfing on its curriculum. 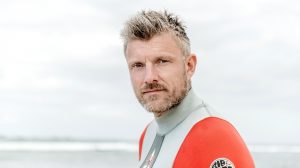 Although Klitmøller is a success story on many levels, Rasmus says there is still some resistance among both fishermen and surfers to new economic developments in the region.

Make no mistake: not only locals, but also surfers can be closed groups, not willing to allow for the wishes of others. You have to be honest about that.

But this resistance can be a good thing, too. If you continue to have an open dialogue between all the parties with vested interests, you’ll get better decisions in the end,” he adds.

“Developing Cold Hawaii is an ongoing process. I think that the most important thing is that we keep an open mind and try to create open doors, opportunities, for all involved.”

You don’t have to be a hard-core surfer, camping out in a van on the dunes, if you want to experience surfing a little longer than just one day.

Klitmøller is also a traditional Danish seaside resort, so Danish style summer cottages abound. Furthermore, there are two campgrounds and lots of B&Bs and AirBnBs.

For those who want to learn how to surf, two surfing schools offer their services in Klitmøller: Cold Hawaii Surf Camp and West Wind. The latter also has surfing schools farther down the west coast, in Hvide Sande and Bork.

Both schools offer various packages with surfing lessons, rental of boards and gear, places to stay and even saunas to warm up in, should the need arise.

”We fell in love with the place from the first time we were here. It seemed the perfect place for us to live a simple life, to surf and to enjoy a less crowded town,” says Vahine.

Their surfing school aims to teach not only surfing, but the surfing lifestyle too. This is why you can also stay in their camp, do yoga, follow up-close how Mor makes surf boards – both new and also, as a novelty this year, recycled ones.

”We always find new ways to enjoy our lives and this reflects the way we run our business. That’s how yoga lessons for our guests came about.”

Vahine has her own yoga studio a little farther down the street, and she has an international Vinyasa yoga certification.

It is an open question whether the Cold Hawaii Surf Camp lifestyle is typical Danish or more internationally oriented.

For Mor, it is an individual style.

It is all about our own personal lifestyle as a surf family. We prioritise our life after what we love, which is surfing, and that is the way we live. Sometimes it is hard because you sacrifice a lot to spend more time in the water, but it is worth it. And yes, it surely shows that we are from a warmer place. It is just the way we are… we like to think that we are bringing some warmth to the cold north.”

How to get there and other practical things

DSB runs trains to Thisted. From there, bus line 322 runs to Klitmøller.

Renting bikes can be difficult, so you’d better bring your own.

You can always try though at the two campgrounds, Nystrup Camping and Klitmøller Camping.